Ethan Gutmann > Posts > Articles > Mr. Gutmann’s Testimony on Chinese Organ Harvesting to the House Committee on Foreign Affairs
Comments are off for this post. 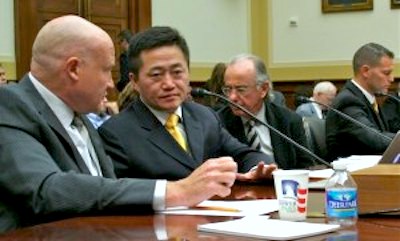 Thank you for inviting me to participate in this profoundly important hearing. Beginning in 2006, I began conducting comprehensive interviews with medical professionals, Chinese law enforcement personnel, and over 50 refugees from the Laogai System, in order to piece together the story of how mass harvesting from prisoners of conscience evolved in China.  Based on my research, the practice began in Xinjiang in the late 1990s. By 2001 the practice expanded nationwide, with Falun Gong providing a much larger, and frequently anonymous, pool of potential ‘donors.’

Yet my time today is short. I too was skeptical when I began my investigation, as some of you may be today. So instead of offering my conclusions, I invite you to draw your own conclusions from my evidence—twelve witnesses, each of whom fills in a critical piece of the organ harvesting puzzle—before I speculate, briefly, on the implications and the full human cost.

I think most people in this room are familiar with Harry Wu’s research. Harvesting criminals began in the 1980s. By the early 1990s it had become systemic, a practice involving “organ donation” consent forms and mobile harvesting vans at execution sites. The donors were criminals. And whether or not the criminals signed the forms under duress, they had been convicted of capital crimes under Chinese law.

My first witness, Nijat Abdureyimu, special officer, 1st Regiment, Urumqi Public Security Bureau, doesn’t dispute any of that. But he does note that by 1994, the doctors doing the harvesting became increasingly uninhibited. That’s when his fellow officer puzzled over the screams—“like from hell”—that he heard coming from a harvesting van. Two years later the prison’s medical director confessed to Nijiati that organ harvesting from living human beings—they would expire during the surgery of course—was now routine.

My second witness, Dr. Enver Tohti, general surgeon, based in an Urumqi hospital, recalls an execution ground outside the city in 1995: a prisoner shot in the chest, not to kill, but to send the body into deep shock, minimizing the squirming and contractions that could make harvesting problematic. Under his supervisor’s firm direction, Enver performed a live surgical extraction of the man’s liver and kidneys.

The execution ground was commonly used for political prisoners, and the man had long hair, rather than a convict’s shaved head. But Enver will not speculate, nor will I: there are no fully credible allegations of doctors harvesting political or religious prisoners—who only very rarely can plausibly be sentenced to death under Chinese law—until 1997, the year of the “Ghulja Incident.”

My third witness, a nurse who worked in a Ghulja hospital, describes a hospital turned upside down: arrest of any doctor who dared to treat a Uyghur protestor, forced segregation of Uyghur medical staff, and Chinese doctors administering slow-acting lethal injections to any Uyghur baby who had the misfortune of being a second child. Finally, she describes, six months after the Ghulja incident, the case of a 21-year-old Uyghur protestor, harvested for his kidneys by a Chinese military hospital.

That timing jibes with my fourth witness, a young doctor ordered to blood-test prisoners in the political wing of an Urumqi prison on behalf of six highly placed Party officials in search of healthy organs. As these political prisoners were not on death row, they panicked and had to be restrained. Against every fiber of conscience in his being, the young doctor played his part. “It’s just for your health,” he said, as he drew blood. Six months later there were six new Party cadres, and the cycle repeated.

The next eight witnesses—Qu Yangyao, Wang Yuzhi, Wang Xiaohua, Jing Tian, Dai Ying, Fang Siyi, Yu Xinhui, and Liu Guifu—come from different backgrounds and were held as prisoners in strikingly different facilities throughout the Chinese Laogai System. Yet all have two things in common: they are all practitioners of Falun Gong, and they were all given strikingly similar medical exams. The doctor, usually military, drew a large volume of blood. Then a chest x-ray. Then a urine sample, probing of the abdomen and, in most cases, a close examination of the corneas.  Did the doctor ask any of them to trace the movement of his light? Did he wiggle his fingers to check the peripheral vision? No. Only the corneas. Nothing involving brain function, no hammer on the knee, no lymph nodes, no examination of ears or mouth or genitals—the doctors checked the retail organs and nothing else.

I defy the Chinese authorities to furnish a plausible medical explanation for such tests. Or why these tests were given to thousands of Falun Gong men and women—particularly women, often matched with an individual guard to prevent any disruption. Or why there were special buses arranged to take away Falun Gong practitioners after extensive blood testing. Or why, as time progressed, “Eastern Lightning” Christians, or Tibetan activists, were given the same exams.

I can’t supply a death-count for House Christians, Uyghurs and Tibetans. But I estimate that 65,000 Falun Gong were murdered for their organs from 2000 to 2008.  And given my time limitations here, I request that you include my recent chapter in State Organs (which explicitly explains the methodology behind that number) along with two articles, “China’s Gruesome Organ Harvest,” and “the Xinjiang Procedure,” in the record of today’s hearings. Anyone who reads this material will quickly grasp the obvious: The demand for the harvesting of political prisoners came not from triads, but aging party cadres. China is a surveillance state, aimed at observing party members and the military. Wang Lijun himself was given an award for medical innovation in organ harvesting. So “Party Central” knew about this. This was state-run. And any reader will quickly grasp why the quit-the-party movement cannot be a reform-the-Party movement.

But ultimately, my writing and my testimony cannot do justice to these twelve witnesses. I cannot replicate the sensation of a guard’s tears falling on my arm as she says that she “can’t bear to see… a living person about to be wiped out in front of my eyes.” But there is one more thing that draws all twelve witnesses together: even if I have protected some of their identities today, I can report—with certainty—that every one of these witnesses has consented to testify openly before this committee. And if they do, a Taiwanese surgeon who can indisputably verify that Falun Gong organs were being used for his aging patients is likely to step forward as well.

Testimony by such witnesses takes courage. It carries intense risks for their families. Shortly after Nijat first consented to an interview with a Swiss paper, his sister, back in Xinjiang, was arrested for three months. And yet, these witnesses have begun to realize that there is strength in the collective narrative and in transparency—particularly if the West, and in particular, the US government, facilitates this transparency. Sadly, no such support has come forward in the six years since the first allegations surfaced. Much more evidence has accumulated since that time, but our government has done little. A tragedy is being played out, even in this hearing today, for in the final analysis, these witnesses are the men and women who should be sitting in this chair today, not me.