Ethan Gutmann > Posts > Articles > Chinese Blind Spot
Comments are off for this post. 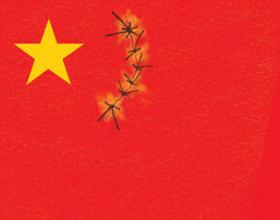 Investigating Chinese surveillance is a rather lonely job. For all the dissidents yammering about dramatic arrests and torture and harvesting of organs, you can’t really guarantee publication or much of an audience unless you can prove that there are links to America: brand name corporations, scary cutting-edge U.S. technology, insidious Washington collusion. That’s the trifecta—and, now, if you could somehow squeeze the elections in there somehow…

Last Friday, it looked like the New York Times had what the English bookies call a quadpot.  “Firm Romney Founded Is Tied to Chinese Surveillance,” the headline beckoned, and the household name part checks out. Bain Capital, specifically the Bain Capital Asia Fund, purchased the video surveillance division of Uniview Technologies, which is supplying the usual cocktail of cameras with a central surveillance collection point. They will be aimed into what the Chinese consider to be public places—you know, universities, mosques, Tibetan Buddhist monasteries, and the like.

Powerful charges. And yet, as the article ultimately makes clear, the Romney family’s100 to 250k investment in the Bain Capital Asia fund that purchased Uniview results from a blind trust in the name of Ann Romney and, according to the Romney’s trust manager, Mitt and Ann actually have no control over those investments. As has been widely reported, Romney actually left Bain Capital some time ago. A further problem for the narrative was reported on the Washington Post’s blog: The Heinz family trust, that is, John Kerry’s wife, actually has a 500 to 1,000k investment in the Bain Capital Asia Fund, and one suspects that, even if Mr. Kerry has no financial connection with his wife as his spokeswoman seemed to claim, Teresa Heinz Kerry could manage the investment a little differently. But the Timespiles on. Isn’t Bain Capital helping to finance Romney’s super PAC Restore Our Future? And Bain Capital employees give lots of political donations to Romney (although, as the Times mentions: “Bain employees have also made substantial contributions to Democratic candidates, including President Obama.”)

Well yes, and that’s the trouble with playing this particular game. Head on over to OpenSecrets.organd let’s look at the contributions coming from, say, Cisco Systems. John Chambers was co-chair of McCain’s 2008 bid, but since he and all the major Silicon Valley execs attended the “world’s richest dinner party” with Obama last year Chambers’s contributions seem to be going the other way these days. The rest of Cisco?  Over 3 to 1 employee contributions in favor of Obama over Romney with Mark Chandler, Cisco’s legal counsel, shelling out an additional $25,000 for the DNC Services Corporation.

Cisco is fighting off legal actions led by human rights foundations that claim Cisco supplied critical components of China’s first real Internet surveillance system under a contract with the Public Security Bureau. That system, sometimes called Policenet, was used to hunt down dissidents of all stripes. Many were killed (actually over 65,000 by my estimate). So are Cisco execs making contributions to Obama because the administration could sway the legal situation somehow? Perhaps. Or perhaps the majority of employees at Cisco just tend to be sort of liberal. And perhaps Bain Capital execs might have sentimental or even idealistic reasons to support Romney.

Okay, so there’s not much of a smoking gun here, yet one hopes that Rep. Chris Smith will hammer on the Bain Capital Asia Fund relentlessly. Any attention to the issue is good, right? Yes, except that theNew York Times has arrived at the party just as everyone is putting their coats on. I personally reported on the issue of surveillance cameras in China (back when it was Sony and Nortel) and arrests based on facial recognition ten years ago. Other news outlets investigated it. The New York Times, with ample assets on the ground in Beijing, ignored the issue for a couple of years. The majority of their reporting took place in 2006, when Yahoo’s betrayal of Chinese journalist Shi Tao drove Congress to hold hearings including Cisco (Mark Chandler representing), Google, and Microsoft (which hosts an impressive amount of Obama bundlers these days). While all this commotion was taking place in Washington, Beijing moved ever closer to relying on Chinese-brand surveillance technology. Which is why we are only needed to fund these things nowadays; Uniview is a Chinese company. So drop the technology transfer angle. The Chinese are now the world’s best hackers after all.

The underlying problem is that the failure to enforce Tiananmen-era legal sanctions on the export of police and surveillance technology isn’t just one of those darn Bush-era messes anymore. Secretary of State Clinton announced a bold new Global Internet Freedom Initiative to find ways around authoritarian firewalls. But the tooth to tail ratio was skewed in favor of the usual feel good media-training organizations rather than the Falun Gong dissidents who already had a proven record in breaking through the Great Firewall. And there was little in the Initiative about the fact that much of the equipment and funding came from American companies.

Somehow, for the New York Times, the West’s underlying loss of confidence in its own values will never be the story. It’s always those others, the enemy within our own ranks. Yet the speedy construction of China’s Big Brother Internet could not have occurred without a bipartisan failure of American policy—and a shameful one at that.